A Fine Line Between Stupid and Clever

It’s fashionable to be contrarian these days.

I know, I know. What an oxymoron, right? And yet it’s true.

Thanks to Mauboussin, Rachleff, Rabois, Taleb and others, it’s become part of the conventional wisdom that you have to be contrarian and right in order to win.

Everybody’s a contrarian. Investors claim that being contrarian is part of their investment thesis. Influencers put “contrarian” in their Twitter profiles.

The problem is that most people have no idea what being contrarian truly entails.

Here’s a hint. If it doesn’t hurt, you’re probably not doing it right.

Anybody can say they’re contrarian. Especially if it makes you look smart – which, on Wall Street and in Silicon Valley these days, it does.

The thing about being truly contrarian is that it doesn’t make you look smart. It makes you look dumb.

The reaction should not be “Ooh, that’s pretty clever! That sounds reasonable. It makes sense”. It should be “What in the world are you thinking? That’s a terrible idea. I just don’t get it.”

Bad ideas are the best ideas

Building a new search engine in 2008? Good luck with that. Blogging with a 140-character limit? That makes absolutely no sense. Disappearing text messages? What a stupid idea. Staying in stranger’s homes and riding in strangers’ cars? That’ll never work. Challenging Amazon in e-commerce? Ha ha, don’t make me laugh.

Of course with the benefit of hindsight all these ideas look brilliant. Reams of thinkpieces have been written about how DuckDuckGo is riding the trend of user privacy, or Uber and AirBnB are tapping into idle fixed assets, or Shopify is empowering the long tail of vendors. But at the time, all of these ideas were genuinely contrarian, sometimes to the point of ridicule.

Do what the dumb money does

Switching gears from startups to finance, I love this quote from Joshua Brown:

There are no asset managers who represent their strategy to clients as “We buy the most expensive assets, and add to them as they rise in price and valuation.” That’s unfortunate, because this is the only strategy that could have possibly enabled an asset manager to outperform in the modern era.

It’s one of those things you could never advertise, but had you done it, you’d have beaten everyone over the ten-year period since the market’s generational low.

If you look around, opportunities to be contrarian abound. You could go all-in on US stocks at the high-water-mark of an 11-year bull market with macro risks everywhere. You could buy long-term German bonds at negative interest rates – a trade that sounds absolutely insane in every possible state of the world. You could invest in a copycat startup with an unproven team in a small market with undifferentiated tech. (Oh wait, Peter Thiel already did that with Facebook). You could advocate for the US healthcare system to be exported to the rest of the world. And so on.

A fine line between stupid and clever

But who would you rather be? Nobody remembers individual clowns; everybody remembers Orville and Wilbur. So embrace the ridicule! Don’t be afraid to look silly!

I’ll leave you with the immortal words of David St Hubbins: 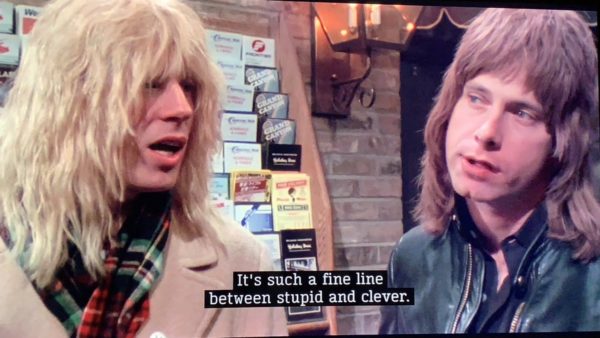 Dare to be stupid! It’s the clever – and contrarian! – thing to do.