APIs Are Eating the World

Visa is buying Plaid for $5.3 billion. The hottest startup in Silicon Valley is an API company. Accel recently hosted a conference devoted solely to API firms. What’s going on?

One of the most influential strategic moves in tech history was Jeff Bezos’ API memo at Amazon. Bezos wrote:

This move had two dramatic consequences for Amazon. First, and most obviously, it laid the foundation for what would eventually become Amazon’s largest, fastest growing and most profitable business segment, Amazon Web Services (AWS).

More subtly, it created an internal communication mechanism by which Amazon could retain the nimbleness of small (two-pizza) teams while scaling to dozens of business lines and a trillion dollars in market cap: the ultimate modular company.

But it was also prescient. The “service interfaces” at Amazon became the blueprint for dozens of tools, processes and entire companies over the next couple of decades, and their story is just beginning.

APIs Are How Software Talks

Software is eating the world. In the decade since Marc Andreessen wrote those words, we’ve seen ever more businesses being transformed by software.

Both of these categories tend to be internal – software improves inefficient (non-software) processes, or drives core business applications. But a huge part of what companies do is external: communicating with customers and with other companies; transactions, invoicing and payments; exchanging data and tasks; supply chain and logistics; and more.

This is where APIs come in. APIs are how software talks to other software.

As companies become more software-centric, APIs will increasingly be the channel over which they communicate.

Plaid is a great example of this paradigm in action.

Plaid is a channel for fintech startups (and ultimately, retail customers) to talk to banks and bank accounts. The Plaid API is eating the physical bank branch: it replaces bank tellers and request forms and check deposit slips and ATMs and customer support phone lines and dozens of other in-person interactions with software calls.

In this setup, fintech apps are the user interface, offering all sorts of behaviour and functionality (save money! track spending! trade stocks!), while banks are the underlying regulated entity, actually storing and moving the funds. And Plaid is the glue connecting these layers.

This is powerful, because (early to mid-stage) fintechs don’t necessarily want to be banks, while banks aren’t necessarily good at offering the products and services that customers want. Plaid allows each side to focus on what they’re good at, while embedding themselves into the heart of each interaction. I’d say Visa got a bargain with their acquisition.

Uber may have started out as a taxi substitute, but the company is increasingly positioning itself as an “API for transport”. By adding new types of mobility, buying stakes in other ride-hailing firms, and releasing new apps like Eats and Freight, Uber is working towards a future where if you want to move item X from point A to point B, you simply make an API call, and the Uber ecosystem does the rest. Uber’s API will have eaten the entire user-facing transportation industry.

In each case, businesses (sellers, investors, importers) interact with other businesses (buyers, data sources, exporters) via API instead of via older and less efficient methods (invoices, terminals, freight forwarders). APIs are eating the (B2B) world.

There are even meta-API companies emerging! Zapier and Airflow help chain APIs together. Postman and Kong help developers use APIs more effectively. (A previous generation included Apigee and Mulesoft). A big part of Slack’s appeal is the way its webhooks make APIs accessible to humans.

To ask the classic VC question, how big can this get? This slide from Accel shows the progress API-first companies made between 2015 and 2019: 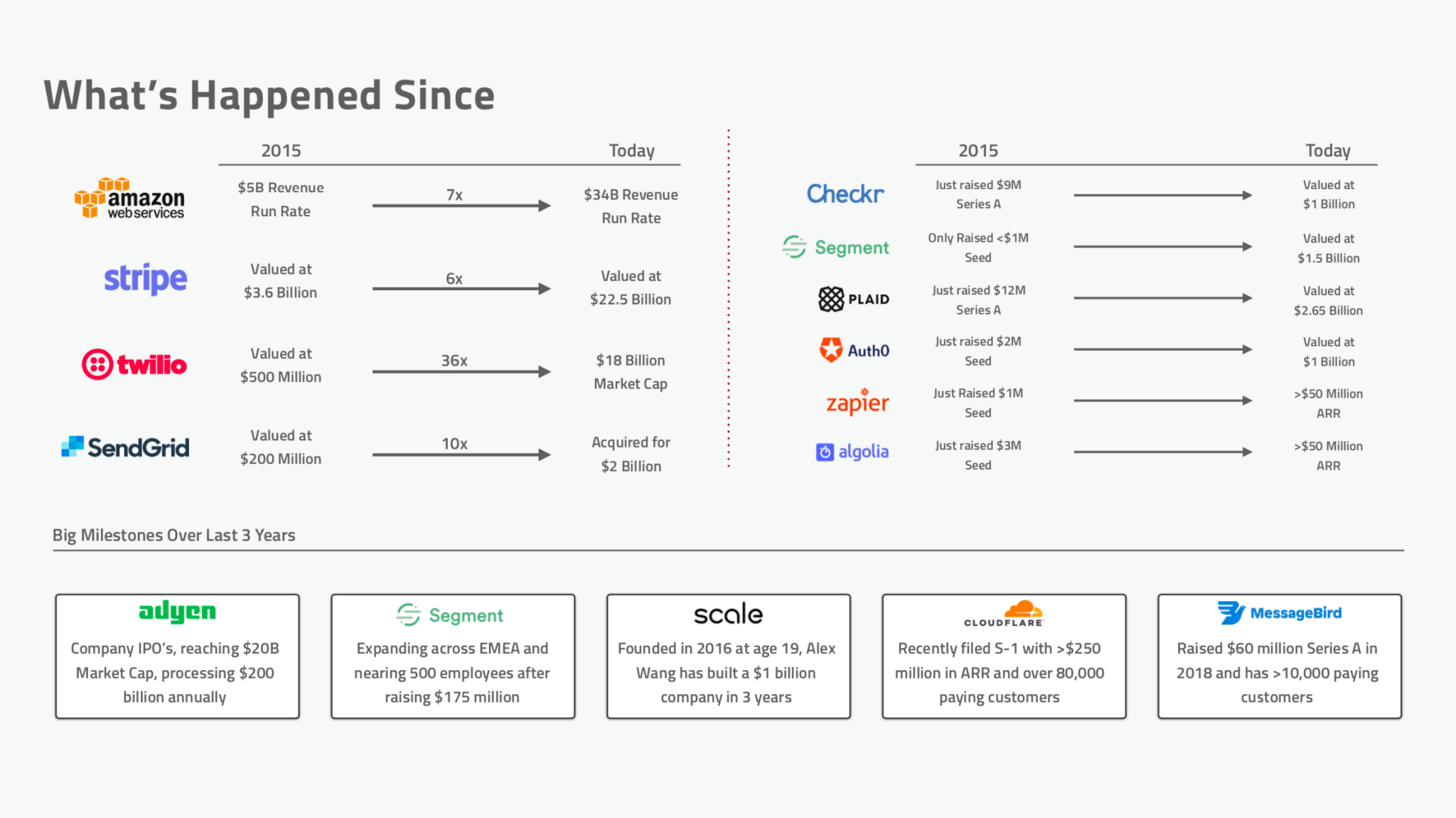 The experience of SaaS suggests we still have a long way to go:

Enterprise software markets are turning out to be a lot larger than most expected.

One thing does seem certain to me, and that is that Plaid will not be the last high-profile API acquisition!